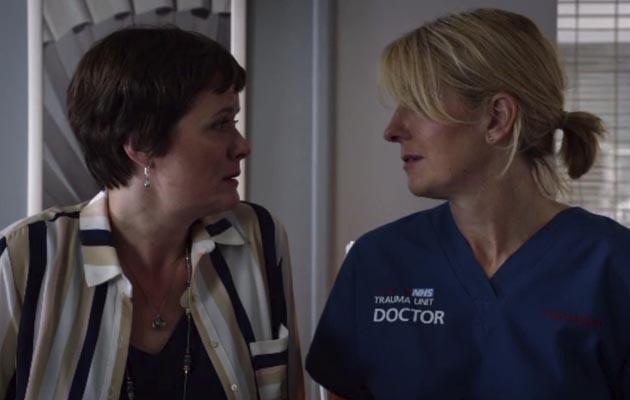 Bernie and Serena haven’t seen each other since their dramatic kiss in the aftermath of the helicopter crash and Bernie went abroad. So with Bernie due back at work, Serena’s understandably nervous and has made an extra effort with her appearance.

At the nurses’ station, the two doctors meet but remain polite and civil – but Serena’s nephew Jason puts his foot in it by asking his aunt if she’s told Bernie about what happened between her and old flame Robbie! Although Bernie pretends to be unaffected, secretly she’s heartbroken.

Later, up on the roof, Bernie confides in Dom that she has strong feelings for Serena. Back on the ward, Jason comes up with a plan to get the two women together – he locks them in Serena’s office! Will they finally admit their true feelings for one another?

Meanwhile, Inga’s envy over the closeness of Mo and Mr T continues to drive a wedge between her and her fiancé. But when she starts to sense there’s far more to Mo and Mr T than just friendship, it seems Inga will stop at nothing to keep her man.

Also, Isaac’s delighted when he receives a research grant and begins the hunt for a new research assistant. As Isaac’s beau Dom and ambitious Jasmine go head to head for the role, it’s obvious a lovestruck Dom will do anything to get what he wants…