SEX AND FAME FOR THE QUIET ONE

IF THERE could ever be such a sub-species amid theatre’s most controversial family group, then Jemma Redgrave would be marked down as the Quiet One.

She has somehow managed to avoid all the lurid headlines which attach themselves to the rest of the dynasty like clingfilm.

While her father Corin and her aunt Vanessa suppressed their talent in favour of Marxist rantings, the Quiet One kept her political opinions to herself and established herself as one of Britain’s most gifted young actresses.

While cousin Natasha Richardson was making news by cavorting with her leading man Liam Neeson, during her marriage to impresario Robert Fox, the Quiet One married a barrister, an eminently non-showbusiness figure, and has become happily pregnant.

And while her other cousin, Joely, was being denounced far and wide for the graphic and lingering nature of her sex scenes in the televised version of Lady Chatterley’s Lover, the Quiet One was winning acclaim for her role as Anthony Hopkins’s daughter in the rather more bucolic Howards End.

But once a Redgrave, always a Redgrave. Next month, it would seem, the soubriquet of Quiet One will be lifted from Jemma’s shoulders for ever. She is about to star in what is perhaps the sexiest series ever to appear on British television.

In her first scene during BBC2’s adaptation of The Buddha Of Suburbia, Hanif Kureishi’s subversive novel of a young Anglo-Indian man’s voyage through sex, drugs and politics in the Seventies, Jemma is seen doing the ironing naked.

From then on, there are very few areas of the Redgrave form which are not featured. The four-part series, is certainly one of the most sexually explicit I have ever seen.

EVEN Kureishi was worried when the BBC bid for the rights to the book, which won the Whitbread Prize for a first novel. He said at the time: ‘I don’t think they can re-create all the book’s sex on television because it is so explicit.’ Well, the BBC has remained so faithful to the original that the American networks have refused to buy the series.

Given that her scenes make cousin Joely’s romps with Sean Bean in Lady Chatterley appear rather prim, how does 28-year-old Jemma feel about the prospect of becoming the most talked-about Redgrave of them all?

‘Do you think it’s explicit?’ she asks, wide-eyed. ‘I suppose it will provoke a reaction. I hadn’t really thought about it. I just think that there have been explicit things on telly for a very long time, but each time it happens it seems to provoke a new reaction.

‘I suppose it sounds cliched, but when I had to do those scenes I so loved the part that I thought they went hand-in-hand with the character. You always have thoughts about exposing yourself to that extent and the reactions it may provoke, but when it came down to it I didn’t have any real qualms.’

Jemma stars as Eleanor, a neurotic young actress who takes hero Karim (Narveen Andrews) on a sexual voyage from adolescence to adulthood.

She says she discussed the scenes with her husband before taking on the role and he gave his blessing. ‘If he had objected we would have had to talk it through, but he read the scripts, thought they were terrific and said I had to do it.

‘He hasn’t seen it yet and I doubt very much that we’ll watch it together. He can watch it if he wants to when it’s on television, but I shall probably go out and get quietly drunk. I’ll video it and watch it later with the curtains closed.’

Jemma has already seen the series at a private screening with other cast and crew members. She says she is proud of it. ‘I thought that if I was able to sit and watch it with other people then I would be happy for it to go out on television.

‘The hardest part was walking out of the darkened room when the screening was over, but I didn’t feel embarrassed. I thought the director, Roger Michell, had done it very well.

‘I met Roger twice before I accepted the part and I trusted him. You do feel terribly vulnerable when you take on something like this, but Roger made us feel quite safe.

THERE was no salaciousness of any sort. Narveen and I had two weeks of rehearsals before we started the first block of filming, and another two weeks before the second block, so we were able to talk about the scenes and establish a friendship.

‘It wasn’t like turning up on the set for the first day and not knowing who you were going to be working with.

‘If I’d thought at the time about the millions of people who might be watching I would have stayed under the covers and never come out. I would have been frozen to the spot, so I didn’t allow that thought to even enter my mind.

‘I know actresses who say they could never do nude scenes, but I don’t have a hang-up about it. I don’t think it’s because I’m an exhibitionist, it’s just that I don’t lose sleep over what people might think about my body. I’m not a supermodel, but I’m not unhappy with my body either.

‘I don’t mind people switching on to be titillated, as long as they switch on. They can decide afterwards whether they thought it was a good piece of telly or not.

BUT IT worries me if they think it’s filth, because I don’t think there is anything filthy about it. I don’t worry about people watching for the wrong reasons. I don’t know that there is such a thing as an audience you don’t want.

‘What you want is for the maximum amount of people to switch on and then have the debate after they’ve watched it. There will be people who will say this sort of thing shouldn’t be on television, and that’s their prerogative.

‘But I expect it will carry all sorts of warnings beforehand. There are three other channels to watch.

‘I know people are going to dwell on the series’ sexual content but there is a lot more to it than just the sex. It is representative of the times we are living in. It is being screened when we are still living in a very worrying time of increasing racist and fascist attacks.

‘That’s why I think a series like this has its place on television alongside all the period dramas and other programmes.’ Perhaps it is a sign of the theatrical bohemianism she has inherited from her fellow Redgraves that enables Jemma to view her most controversial role with almost child-like confidence.

It will be interesting to see how the Quiet One reacts to the furore which is about to engulf her.

AS A third-generation member of the famous thespian dynasty, Jemma Redgrave has acting in her blood. She is the daughter of Corin, niece of Vanessa and Lynn, granddaughter of the late Sir Michael, and cousin of Joely and Natasha.

Jemma, 28, has taken leading roles on stage in such classics as Cyrano de Bergerac and As You Like It, and played Alan Alda’s leading lady in Thornton Wilder’s Our Town. From next week she stars in Anthony Burgess’ new version of the Russian comedy Chatsky at London’s Almeida Theatre.

Her parents split up during Jemma’s teenage years, with her mother Deirdre declaring that Corin, a member of the Workers’ Revolutionary Party, was trying to turn her into ‘Mrs Lenin’. Jemma divided her time between both parents. Last year she married her barrister boyfriend Tim Owen, and they live in Kentish Town.

* YOUR FAVOURITE CLOTHES?
‘Apart from jeans I have an English Eccentrics shirt that I live in. It’s got acorns and wonderful swirling patterns. I bought it two years ago and walked out of the shop wearing it. I like Nicole Farhi’s jumpers since they last for ever and are one designer item you can buy conscience-free, whereas I couldn’t possibly buy one of her tiny T-shirts for £100, or whatever they cost. At Christmas I tried on a fantastic Vivienne Westwood bodice with extraordinary angels and a tight velvet shirt. I was tempted, but I didn’t have the guts to spend so much on something I wouldn’t wear very often.’

* YOUR FAVOURITE SHOES?
‘A pair of old-fashioned plimsolls, which are very hard to get now. I’ve worn them to death and they’re full of holes, but I can’t find a replacement pair. Incredibly loud trainers are all that’s on offer in most shops. I have a pair of platform shoes, but they raise me to 5ft 10in – I’m 5ft 8in without them – making me feel terribly tall and intimidating. I bought my long suede boots from Russell & Bromley and I wear them with leggings and skirts. You have to be careful when you wear them with minis, though, otherwise you can look as if you’ve stepped out of the Starship Enterprise.’

A few days ago, I came across this gorgeous black & white portrait of Jemma and Naveen… take a look: 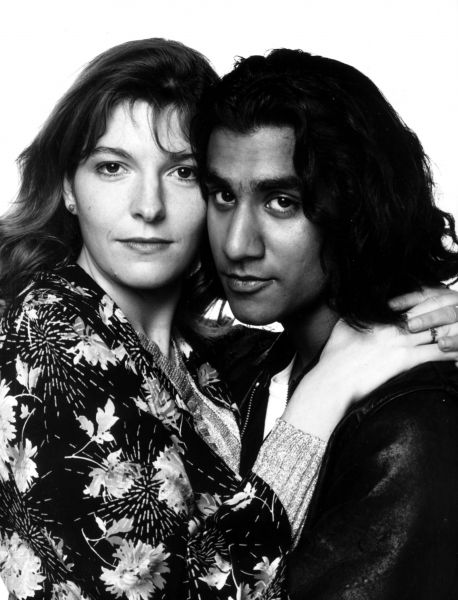 The gallery’s been updated with a HQ still from Jemma’s play “Chatsky“: 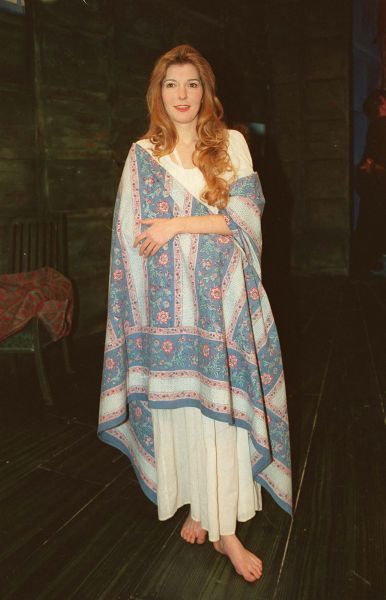