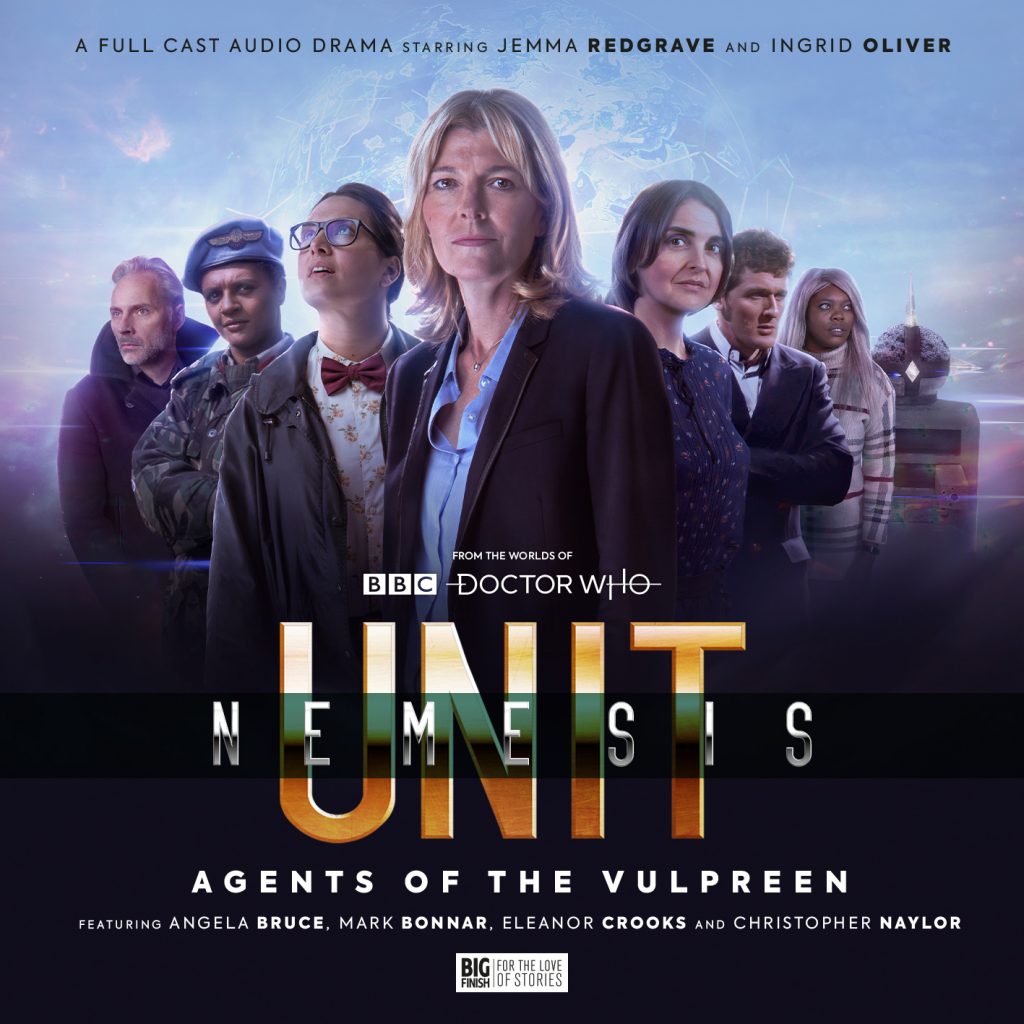 Big Finish have released the story details and cover image for “UNIT: Nemesis 2 – Agents of the Vulpreen” which is due for release in March 2022. It’s wonderful to see Angela Bruce back as Brigadier Winifred Bambera:

UNIT has stopped the Eleven’s efforts to retrieve the Arch. But questions remain. How did an artefact imbedded with advanced technology become buried under a prehistoric lava flow? Why does it form a connection with an alien world? And just who are the Vulpreen, the alien race that live there?

Those questions are about to be answered…

2.1 The Man From Gallifrey by Andrew Smith
As Osgood works flat out to rescue a lost friend, Kate is at a demonstration of a new UK spaceship, the Starseeker. There she meets two people.

Lieutenant Jimmy Tan looks like potential UNIT material, and the stranger called Hasper knows a lot about UNIT and the Eleven. He should – he’s the Celestial Intervention Agency operative who sent the Eleven through the Arch millions of years ago.

2.2 Power of the Dominators by Kenneth Grant
Portstone New Town is a living space for the future. A dream community, or so the advertising promises. But UNIT discovers the developers are alien Dominators. Which means there’s a more sinister purpose behind Portstone, and the Dominators’ deadly killer robots – the Quarks – can’t be far away.

2.3 The War Factory by Lizzie Hopley
Temporal anomalies strike in the present and the past – 19th century infantry at Belmarsh Prison in the present day, and Brigadier Winifred Bambera is confronted by Tudor warships on the Thames in the late 20th century.

Enquiries by UNIT past and present lead them to the site of Woolwich Arsenal, where the Eleven is trying to create a bridge to another world. And UNIT will learn he’s not the only one on the side of their alien adversaries.

2.4 Ten Minutes in Hell by John Dorney
On the alien world on the far side of the Arch, the Vulpreen put their human prisoner through an ordeal. Osgood must lead a desperate rescue attempt – and she’s got ten minutes to do it.