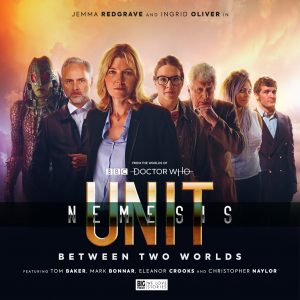 Finally! The new UNIT audio from Big Finish – “UNIT Nemesis: Between Two Worlds” is now available to buy/download. There is also a cracking trailer where Jemma as Kate introduces the team:

The four stories in the set are:

The Enemy Beyond by Andrew Smith

Fire and Ice by John Dorney

They find themselves caught in the middle of a conflict between Ice Warriors. And one Ice Warrior isn’t so icy – in fact, he’s red hot. And getting hotter…

A series of jewel robberies in London and the Home Counties draws the attention of UNIT when it’s discovered that some of the stolen gems are alien in origin.

The robberies are the work of an organised criminal gang led by East End villain Ava Drake. But Ava has a new, ruthless partner. The Eleven has promised her riches, and for him the gems are a means to defeat UNIT and regain the arch.

The Curator’s Gambit by Andrew Smith