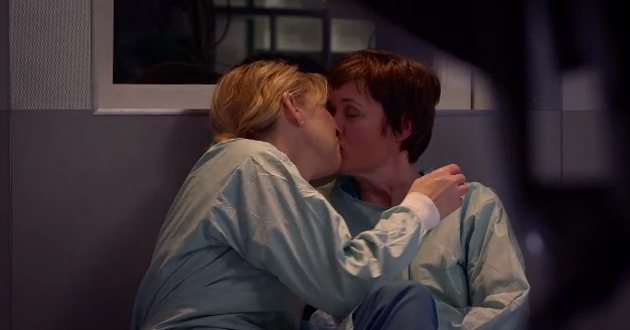 There were shocks aplenty in tonight’s Holby City when, after a traumatic day at the hospital, Bernie kissed Serena! We chatted to Catherine Russell – aka Serena – about the big moment…

As Holby was dealing with the aftermath of the catastrophic helicopter crash, there was further drama when AAU ward manager Adrian ‘Fletch’ Fletcher was accidentally stabbed by a patient.

Bernie and Serena battled to save their friend and colleague and, as he was moved to intensive care, an exhausted Bernie and Serena sat on the floor outside theatre where Bernie told Serena she blamed herself for the fact Fletch was now fighting for his life!

As Serena reminded Bernie of how great she is both personally and professionally, then came a big shock, as a relieved and grateful Bernie leaned in to kiss Serena!

We got the lowdown from Catherine Russell – aka Serena – about how it happened, why it happened and what’s next for #Berena…

Well, that was quite some episode Catherine! Just remind us about events leading up to THAT kiss?
“Well, with Bernie feeling incredibly vulnerable, Serena’s desperately trying to reassure her it wasn’t her fault and tells Bernie she’s absolutely brilliant, fantastic and marvellous! And that’s when Bernie responds in an extremely relieved and grateful manner. It certainly comes as a surprise to Serena… but it’s not a disappointment!” So how did Serena react?
“Well, Serena’s surprised and she does pull away initially. Serena totally didn’t see it coming but, when it did, I think she was all for it.”

In the scene leading up to the kiss, Serena and Bernie [Jemma Redgrave] are slumped on the floor outside theatre, emotional and exhausted, having just operated on Fletch. How did the two of you find the emotion for the scene?
“It was the day after the Brexit vote and both Jemma and I had spent the entire day bursting into tears and being really genuinely upset. That was the very last scene being shot on that day, so we were both genuinely knackered, upset and deeply stressed out and we did the read through for that scene sitting on the floor and the director said: ‘That’s it, don’t move, do it like that.’

“So while there are not very many silver linings to the Brexit vote I can say that that was one of them – I think the scene benefited from that because there was no acting required, we were just really p***** off!” Bernie and Serena have become great friends in recent months – but has there ever been a sense that there were those sorts of feelings between them?
“Well, I think there has certainly from Bernie’s point of view, though I’m not sure either of them were aware 100 per cent that that’s where it was going. That said, I think it’s bloody obvious to everybody else that that’s where it was going!”

Ah yes, we’re aware there’s a #Berena trending on Twitter…
“Yes there is. On my Twitter feed, people have been talking about this for months and referring to #Berena – almost from the very first moment Jemma and I were on screen together, people spotted it, right from the word go!”

So do you think Holby fans will be pleased to see this latest development for Bernie and Serena?
“Oh yes! I’ve had messages, Tweets and letters from fans all saying that they want us to get together and they really think it’s brilliant. Lots and lots of great responses. So I think and I hope that people will be delighted.” Do you hope the storyline generally will have a really positive impact?
“Well, from the perspective of a lesbian viewer, there’s so little out there on regular TV that they can look at and go: ‘That represents me, there I am’, that I feel a great responsibility to get this right and I hope we are getting it right. And I think for those people it will be really quite significant. Over the years, gay men have had role models on TV shows, including Holby, but there are very, very few gay women. So I think and hope there will be a good deal of support. At the end of the day, love is love.”

What’s it like working with Jemma?
“Oh, she’s hilarious and we really have so much fun. It is such a delightful place to work, we all get on so well and it’s a joy to have another woman of a certain age on set to play with.” How do you think Serena and Bernie will deal with what’s happened in upcoming episodes?
“The aftermath will be interesting because the kiss happened so much in the heat of that particular moment, after that particular day – it happened when feelings were running high, people were feeling vulnerable and tired and it came out of that. So it’ll be interesting to see how Serena in particular feels about it in the following episodes.”