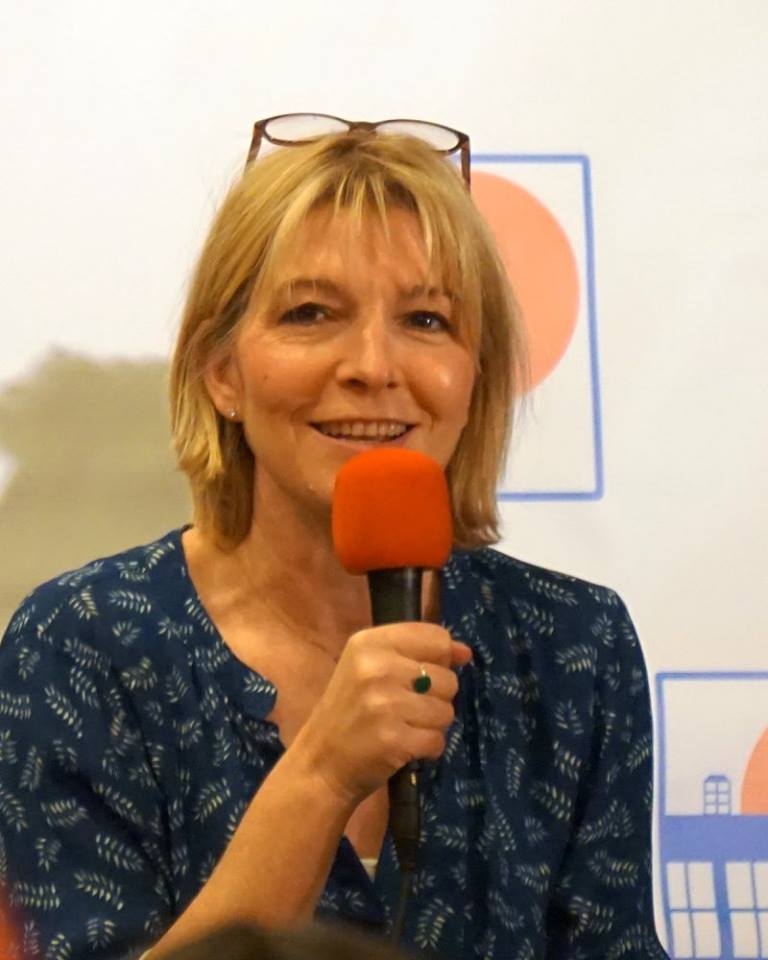 Kim: That is our mantra! We will be in glitter all weekend.

Jemma: I’m going to need some of that!

Kim: Welcome to LI Who! Weren’t you supposed to come last year?

Jemma: I wanted to come last year but I got a job, so we were delayed by a year. I’m so glad to be here now!

Kim: I want to talk about that scene from “The Zygon Inversion” with Peter, Jenna, and Ingrid. What was that LIKE for you?

Jemma: You’re not the first person to ask me about that scene. It was a fantastic script, a completely brilliant piece of writing and it was toned down slightly because of the obvious parallels. But it’s an incredible scene and it plays out…I think it’s 5 or 6 minutes and we rehearsed it and Peter came in and that performance! My God, that man works. When Peter’s not filming, he’s round the corner on set and there’s a desk for him because he’s got scripts and he’s studying. He’s learning and learning and learning because he’s got these huge speeches. But that…that was like theatre. He came in and it was mesmerizing.

Kim: And you are watching and reacting to him but you’ve still got to deliver your line!

Jemma: It was an extraordinary scene to be a part of and it required absolutely no acting because it was so moving and so from the heart. From Steven Moffat’s heart and from Peter Capaldi’s. It was a privilege and an honor to be a part of it.

Sage: I love that in Series 9 you see the relationship that develops between Kate and Clara, where Clara is somebody who gets the call. It seems like there are things that occurred and there were conversations that were had and they’ve been planning and scheming about what to do when something happens. Do you get to have conversations about Kate’s arc for the whole series or does it just come script by script?

Sage: So then how do you say “Jenna, this is what our relationship should be like in this particular episode?”

Jemma: We develop it scene by scene. You get the script and you get on the floor. You get used to picking up the clues very quickly. Jenna and Peter are fantastic. Jenna is a MARVELOUS actress. Peter, you see it and you see his brain working. Jenna is…when you are working with her on the floor, you see a certain amount of it. But when you actually really see it, when you see it on-screen, she’s working on two levels. She works so sensitively and communicates things to the camera that you don’t pick up when you’re face to face. The relationships really develop in the moment. Script by script, certain aspects of Kate’s background or character get revealed. So I didn’t know she was a bridge player and a gardener till I got that episode. Although, I might have guessed that. I’ve done a lot of work on her, created a background and a private life for her. I do think there’s a certain amount done, for example, with costume design. Peter said, when there was a lot of walking around with the Zygons in rubbly basements…

Kim: And you were doing it in heels!

Jemma: And Peter kept looking at my feet going “Really? REALLY? You know UNIT is an Army. Really?” But you see, the thing is, the costume designer and I worked on the character. Yes, she’s part of an Army and yes, she wears suits, and yes, she’s kick ass but there’s something really nice about the fact that she displays her individualism through quirks of costume. She likes to wear heels!

Kim: And that’s just a way for her to promote her femininity too. “I can still be all these things and rock a pair of heels.”

Sage: It’s so wonderful, with those episodes in particular, we have Kate and Osgood and two versions of Clara. It was such a wonderful female-forward arc for the show. It seems like having Kate in charge of UNIT changes the dynamic. As soon as she comes on-screen, it’s like the ladies are double in charge. It shifts it.

Jemma: It does! And if you look around at the episodes that I’ve been in, like the Cybermen episode (“Dark Water” and “Death in Heaven”), there’s Osgood and Kate and Missy and Clara. They create fantastically strong female characters. And all very distinct. They are not similar, there’s an age range, they are all flawed, they’re brilliant. It’s very empowering for girls to watch. And that’s great.

Kim: When you did the 50th Anniversary, did you expect that you would become a recurring presence?

Jemma: No. I had no idea. It’s been an unfolding joy and it’s been a great joy of my life. Because I think our lives are profoundly affected by it. There are few things as important to a human being as a sense of community and one of the things that has opened up to me through this part and this series is being a part of an incredible community. I’ve been embraced, partly because of Steven Moffat and partly because of Nicholas Courtney and I’m immensely grateful. It’s a privilege and an honor to be a part of it. I mean that from the bottom of my heart.