TNT’s limited-run series “The Grid” premieres with a two-hour episode on Monday, July 19, and will air on subsequent Mondays at 9 p.m. EDT, winding up with a two-hour finale on Aug. 9. The show’s focus is on the escalating rise of terrorism around the world, and efforts by American and British counter-terrorist experts to contain it and, ultimately, end it.

Jemma Redgrave says she didn’t hesitate for a moment when asked if she would like to be part of the TNT miniseries “The Grid.”

Redgrave (who is a member of the famous Redgrave acting family — her grandfather was Sir Michael Redgrave; her dad is Corin Redgrave; her aunts are Vanessa and Lynn Redgrave; and her cousins are Natasha and Joely Richardson) says, “I knew from the moment I read the script that this was something quite special. The story was, as you might imagine, chilling, given its subject matter. And also very well-written. All the characters are clearly defined: You know who everyone is, not just what everyone does. And you also see how what they do affects them as people, not just as professionals faced with, essentially, the challenge of saving civilization as we know it. And, I might add, that what you see on screen is all based on research into how both terrorists and counter-terrorists work.”

One of the elements that give “The Grid” that “special” quality that appealed to Redgrave is the way it takes note of both sides of the issue.

“We know we’re the good guys,” she says. “But the bad guys also believe that that’s what they are: that they’re doing what is right against an enemy — us — whom they believe to be wrong. And I feel that we need to know why they feel this way if we’re to be successful in dealing with them.”

(Note: The producers asked scholars of Islam to contribute to the production so that both Muslin and non-Muslim viewers would have an understanding of what the faith actually teaches and why some Muslims, as represented by the terrorists, feel that their interpretations, which defy these teachings, are valid.)

Redgrave says her character, Emily Tuthill, is a fascinating woman who has learned not only how to play the game in the world of counter-intelligence that has long been dominated by men, but to play it with exceptional skill.

“Women who step into any area once reserved for men,” Redgrave says, “have that sometimes unspoken, but always present challenge to prove themselves over and over again.”

For Emily, the challenge she has chosen for herself is to get the job done, however she has to do it, and preferably with little interference from her fellow agents.

“She’s been described as a lone wolf,” Redgrave says. “Maybe so. But as we see in the course of the series, there’s a lot more to her than might be apparent at first.”

Jemma Redgrave and her husband, Tim Owen, have two young sons. It’s been suggested that the war on terrorism might continue well into their adult years and perhaps even into the lives of her children’s children.

“I know,” she says. “And we can only hope that that won’t prove to be the case, and that somehow the forces of reason will prevail — sooner, rather than later.”

On my search for ‘new old’ pictures I came across this promo photo of Jemma as Emily Tuthill: 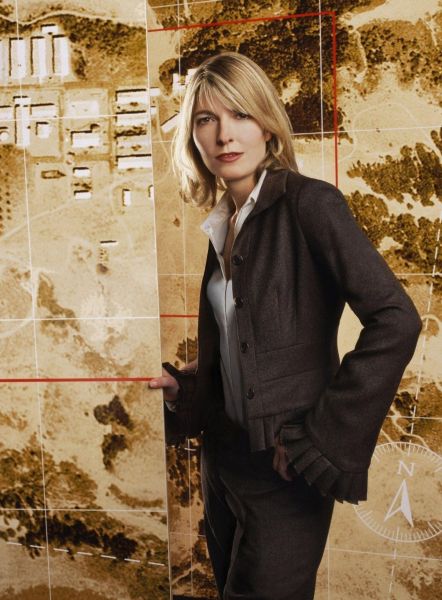